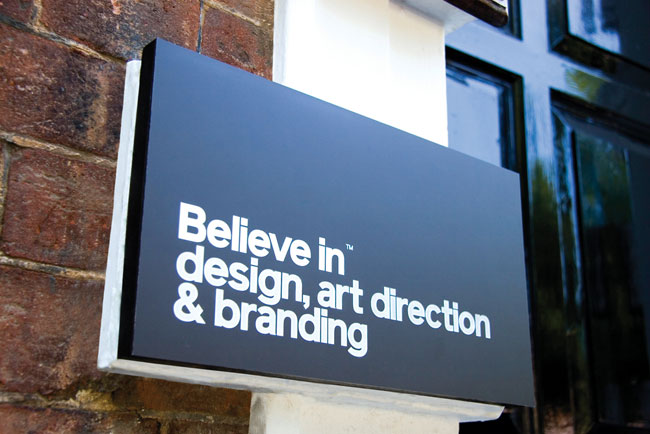 After 14 years in business, biz-R as a name no longer represented who we are, and said little about the business we’re in. So when we made the decision to relocate the business we knew that it made perfect sense to rename and rebrand the agency as part of our overall repositioning strategy.

We spent around six months (on and off) brainstorming and considering a suitable name. It had to be right. It had to have an idea at its core. It had to communicate our brand. It had to provide a web domain name. Most importantly, it had to be creative, relevant and unique.

Much writing of lists and discussing followed (shortlisting stage below).

In August 2009 we looked to pursue the name ‘Make. Believe’. (to ‘make’ (create) and ‘believe’ (stand behind) — design and branding in a nutshell). Unfortunately in September 2009 Sony unveiled its new global brand message — make. believe : Sony.

As a response, we looked at simplifying to ‘Believe’, but felt this had too many religious connotations. Further investigation and experimentation uncovered an opportunity to create a more language-centric approach with ‘Believe In’. This provided us with the opportunity to extend the brand name by adding extra words – i.e Believe in design, Believe in blogging. Bingo!

We knew that we wanted the identity to be simple and confident. That is our philosophy in general, so it was a natural direction. The name being a language-based approach answered it’s own brief. Let the typography ‘become’ the identity. Beautifully crafted and typographic in its entirety, keeping everything stripped back to its core. The aesthetic execution of the identity is all about the use of space, the grid and proportions. Over designing for the sake of design would simply form a distraction from the message and take from this strong communicative approach.

Selecting a typeface was fairly straightforward. We had been following the progress of a young Brighton based type foundry Colophon and were intrigued by their latest neo-grotesque font family Reader. Reader is based on an old letter the designers had found from the RSPB dating back to 1972 (whose original typeface is unknown). This regeneration of something old into something new, supporting new talent and a beautiful Swiss-inspired face formed the basis for perfect partnership.

We have customised the weight of the face for the main identity. We are in discussions with Colophon about creating a custom face for us along these lines for when we create unique extensions to the marque. Otherwise we use straight bold for everything else.

Colour-wise we continued with our philosophy and went minimal with black, white, metallic silver and tones of grey. By following our simplistic approach we are allowing the message to communicate in its purest form. When used in conjunction with images, the elements compliment rather than fight for attention.

Since launch we have thus far produced:

Letter heads & compliment slips
Printed in 1 colour litho to both sides with Pantone® 877 and reflective silver foil blocking to the marque. All on 115gsm James McNaughton 100% recycled Cyclus offset. All printed by Kingfisher Print in Totnes, Devon.

Additionally we have applied the identity digitally on:

Blair Thomson is creative director at Exeter-based studio Believe in. You can read the name-change press release here (PDF file 0.4MB). Believe in on Twitter.

Wow, I’m in love. And I love that typeface. I’m curious to know how long this all took and if it happened in one fell swoop. Why so many printers?

Love the new look (and the work).
From the other side of the world (Sydney, Australia) a ‘Devonian’ Graphic Designer feels wistful to be living and working in Exeter!

Absolutely Beautiful. I love the typeface and i love those colours together. Perfect.

Its so easy to over design your own identity, trying to throw in all the tricks in the book, well done for keeping the design to the point. Looking good.

Thanks for another great post. Also love your new blog, I just got the time to browse properly… nice :D

I’m always a little interested when a design agency re-brands themselves. I sometimes think it’s because they can’t have much work on. I’m pretty sure it isn’t the case with these guys, I love the concept, “believe in” works with almost anything.

Awesome! I love the print materials and the sketch books! The name itself is such a clean and inspirational name. They definitely believe in their brand! Looks good guys.

Very simple but all the best ideas usually are. Great idea and nice typography. Very flexible brand that should last the test of time – well done guys.

Believe.in would have been the icing.

They should thank Sony for taking their original idea for a name. It’s great to see that they forged ahead and came up with something even better. Beautifully executed on so many levels. Congrats!

A beautifully crafted identity executed with surgical precision. I love the endless creative possibilities of “Believe In: ________ .” Simple but brilliant. Hands down one of the best Design Agency identities I’ve seen. This is seriously great Branding.

Thanks for all the positive and inspirational comments — we salute you.

Answering a few questions back:
— @kr : tell me about it. Have tried to obtain that one and nearly had it. #fail #keeptrying
— @Ebi Atawodi : the initial identity was completed early on. The application of the materials came later to tie in with our move. Inevitably it all happened rather quickly at that point. Also on the printers – actually we only used 2 printers. Generation Press are masters of print finishing like foiling and duplexing so we wanted the best on the case. We also wanted to support our local printer in Devon so they got the more straight forward stuff. The sketch books were actually foiled by the company who manufacture them.
— @Jo : big up the Devonshire massive down under. Pint of cider, a pasty and a few cream teas are in order!

Thanks David Airey for your continued support and help with publishing this article. Rock on brother.

Love this identity; from the typeface chosen to the color palette. Excellent work.

Very well done… you should all go out and have a ‘Fat Yak’!

The simplicity of the concept and the sleek typography are a stunning combination.
I love the endless possibilities for the extension and promotion of your brand.

But what’s best of all about this identity is that we feel and emotional connection to the brand and the business straight away even before we know anything about you.

If I found your postcard in my local cafe I’d keep it (that’s rare and worth bottling).

Your toughest job now Blair is going to be dealing with clients who walk in and say;
“We want you to create an identity for us that’s just as good as yours.”

This is simply gorgeous!

well thought out and considered piece of identity. great stuff.

Sorry but do not understand the ‘stunning’ reactions? Yes it’s not bad but that’s about it. I have seen this a million times in an equal amount of shapes… Very safe execution and not very original concept! Sorry…

I like the concept but i don’t like the typeface chosen. I think it has problems when printed because of the kerning (i.e. the ‘l’ and ‘i’ – Be li eve in). Especially when hot stamping the logotype or when using rubber stamps with it.

Brilliant! The printers have done a real nice job.

Nicest work I have seen on here I think. Little gold star.

Love this branding. The simple ideas always work the best.

Brilliant, stamps are such simple yet still effective tool, and still very popular for such good reason — they are cheap, effective, creative. Stamps Direct are are a good supplier. We also use them for certain materials. 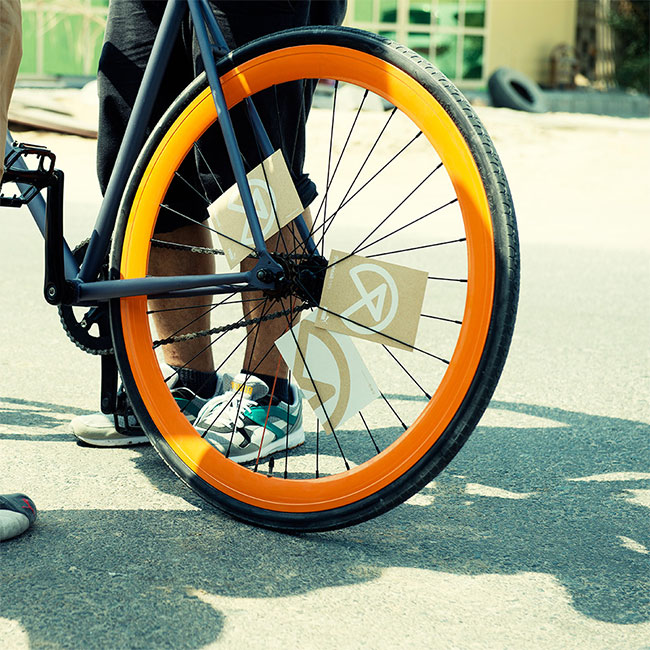 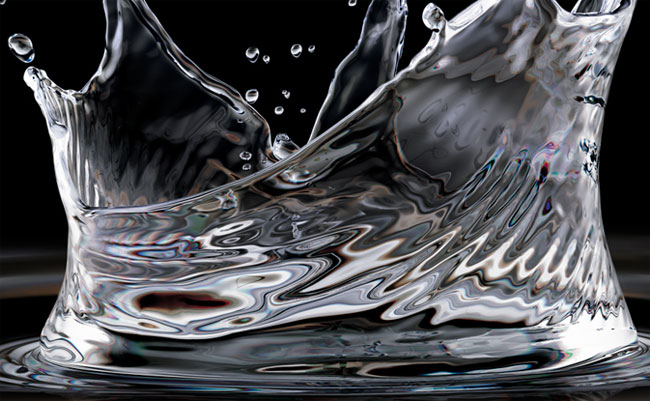 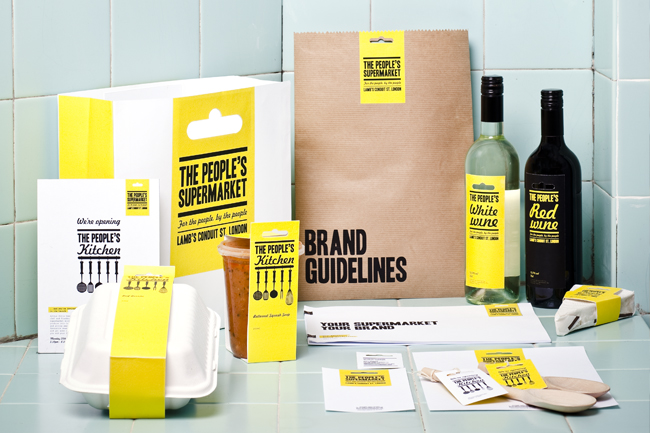