In May 2013, Inteligência Marketing created the brand identity for IBRA, a new civil society institute established in Itajai (Brazil). IBRA aims to raise awareness of the present and future population in relation to the environment, as well as encouraging the preservation and dissemination of Brazilian culture.

The toucan is a typical Brazilian bird that is known for its beak, its indescribable beauty, and its vibrant colors that match the joy of Brazilian people and reinforce the diversity of nature. Named Tulio, the mascot demonstrates the sympathy of the organisation, but because it is an endangered animal, it also represents the mission of the entity and involvement towards nature.

The toucan idea wasn’t initially approved by the client, so Manoel created another two options.

But when the toucan design was posted on Behance it received a lot of comments and interest from the media, so the client reconsidered the option and now everyone is in love with it. 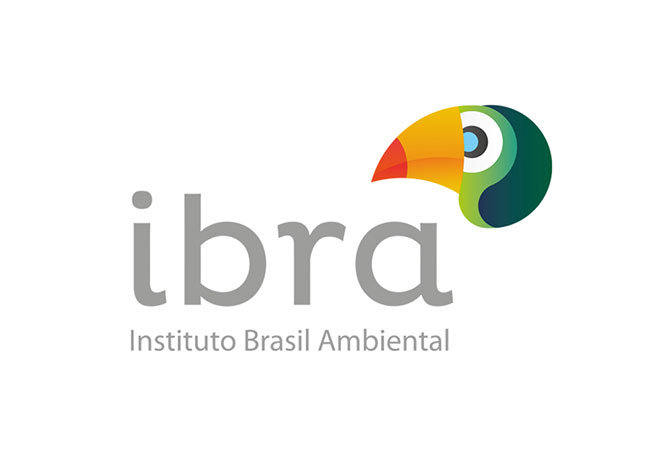 Three months were devoted to the idealisation of the identity. Everything started from the in-depth knowledge about the institute. The site visit and information exchange with those responsible for the program was essential.

I like it, and especially the more abstract forms. The design relies partially on gradients and I would have liked to see how the design works in black and white. Compared to the alternative designs the added color red adds a warm counter balance to the cooler (blue) and neutral (green) colors. The typography of “ibra” is a little quirky (and different from “Insitituto Brasil Ambiental” in Myriad(?) but makes it memorable.

I like it, too. The toucan, typography and geometric shapes are lovely and the vibrant colours really bring it to life. As Christian says, I’d like to see a solid version of it, rather than using gradients, but that’s a minor quibble.

As with other identities we see posted here and elsewhere, I’d like to see more of the identity in application rather than just mock-ups. The website, for example, is very different in real life to the one shown above: http://www.itajaimaisverde.com.br/.

The other thing I find interesting is how the identity was initially rejected by the client, then accepted after it was praised on Behance. This raises two interesting points for me. First, the designer obviously created an identity that fits the organisation, and that’s what Manoel was hired for. I’d be interested to know why such a wonderful, vibrant design was initially rejected. Second, related to my point above, I’m not sure how I feel about designers sharing client work before it’s been either accepted or adopted.

Deffinately the tucan design is the best idea, but I miss more movement. I see the entire design a little bit static.

Love the toucan. And while my next comment is useless, I must say I want that water bottle.

Love the shapes of the toucan and the colour pallete. The toucan is definitely the best of the three.

Design 2 – eek! This was far too generic IMO, thankfully they didn’t go for it!

I would agree with Christian about the gradients. I would have liked to see the toucan made up of flat colours with perhaps some tonal variations rather than gradients, how would the toucan work as a white out of black (for example) without just switching it all to grayscale?

I’m afraid the typography leaves me a bit cold though. The font is a bit ‘weedy’ in my opinion, particularly when lined up against such interesting shapes and colours.

Hey guys, thanks for the comments. :)

For your doubts about the one color logo:

About the post on Behance being approved before the logo:

This was previously discussed with the team, then we published IBRA to “prove” our idea. No work is published before authorization.

And the site, unfortunately I could not do it. :(

Thanks for all the comments guys, really.

Manoel – Thanks for the insight!

Love the use of the beak throughout the design. Also the color scheme that was chosen as well.

Its very well executed. A very polished piece of work. Somehow it leaves me feeling very flat. I can’t feel any passion or personality coming through with it. There’s nothing wrong with it, its just a bit ’90s and coldly corporate somehow.