If craft beer in America hasn’t reached a saturation point, it’s getting close. This is a bit anecdotal, but the people we look to for beer news, our most ardent beer geek friends, have stopped following local openings, news and festivals — there’s just so much that it’s hard to keep up. But as we increasingly work with breweries outside of the US, in places like Australia, Scotland, Mexico, Argentina, and the Netherlands, we realise there’s another world out there welcoming beautifully made craft beer with open arms. There’s an army of young brewers lining up to meet this demand.

From all the emerging craft beer markets around the world, none present such an enticing opportunity as China. For context, the number of breweries in China, now more than 300, has doubled in the past few years. And with more than a billion people in the country, it represents a big enough opportunity that AB InBev has weighed in with a major brewery purchase (Boxing Cat).

While many Chinese craft beers are made with local ingredients such as chrysanthemum, Oolang tea, and Sichuan peppercorns, you’re just as likely to come across familiar American staples like IPAs, porters, stouts, and even some of the trendier styles of Hazy IPAs, barrel-aged programs, and Brett experiments.

When we were first approached by Prodigy Brewing, an upstart craft brewery in Beijing, we were excited and a bit nervous. While we’ve worked with several international breweries, China presents a different language and culture with very little carryover from the States. Making this more of a challenge was that there were no Beijing travel plans for the project, so we’d be working remotely with both the Stateside team and the Beijing-based team.

We begin our strategy process by looking at goals, messaging, positioning, audiences, differentiators, and the essence of the brand. In this case, we also attempted to define the Chinese craft beer drinker through talks with Prodigy’s owners, the brewing team, and their Chinese partners. We carried out a competitive analysis of the major craft breweries in Beijing, and worked to define what the idea of a Prodigy meant in a craft beer context.

The main ideas and communication pillars to emerge early in the process included education, pedigree, quality (still a differentiator in China), and the hard-to-pin-down idea of blending American and Chinese aesthetics without being tone deaf. Interestingly, whereas Americans revere and pay a premium for American-made products, the average Chinese person doesn’t share the same sentiment for local, Chinese-made products. They view American-made craft beer as the standard bearer.

Working as closely as possible with the client, we began sketching identity options before arriving at two directions.

The first direction was a literal combination of Chinese and American craft beer aesthetics. The four Chinese characters nested perfectly within big, friendly English typography. Colour and patterns would round out the system.

The second direction focused on a crane — a revered symbol in Chinese mythology that represents longevity and wisdom. While contemporary in line weight, we had some wiggle room with the colour as to whether it felt old or new.

The Stateside client team loved both directions. But then we hit a snag. They shared the work with their community in China, comprised of home brewers, beer geeks, bar owners, and distributors. This round of critique brought up a frustrating and humbling issue; our ideas looked Japanese. Not overly, but enough that they would immediately stand out to a Chinese beer drinker. When you’re unable to get that first-hand experience of something as foreign to us as China, it turns out that a lot can get lost in translation.

In response, our client suggested what would become the most important element of the project — “CODO, will you come to China with us so you can experience what we’ve spent the last six weeks talking about?”

Visas sorted, bags packed, we were off to Beijing. After landing we immediately met with the Prodigy Brewing team, and set out for drinks, food, and more drinks, in Jing A, Slow Boat, and Great Leap — prominent craft breweries in downtown Beijing. We soaked up the local nightlife, and it was interesting to see the same trends and tropes we know from the American craft industry. Besides the all-too-familiar exposed brick, hanging Edison bulbs, and subway tile, there’s your dyed-in-the-wool “Hipster Brewery,” your “Dad Brewery,” and the venerable “OG Craft Brewery” that makes amazing beer but is now looked upon as the establishment (despite the fact that they pioneered the local craft options). Perhaps cynicism is one of America’s biggest exports.

The following day we took a 2-hour bullet train to the contract brewery in Handan. The facility was fascinating, if not surreal — we’d traveled to China and suddenly found ourselves in German brewery. Chinese regulations prevent you from operating a brewery unless you’re capable of producing 12,000 or more bottles per hour. As a result, many of the Chinese craft brands rely on this particular contract brewer. After touring the operation, we ended the visit with lunch and some fantastic beer in their brewpub.

Back in Beijing, following some hot soup, pig brains, pig blood, and cow stomach (a first), we decided to visit Great Leap’s Hutong brewery. The Hutong are neighbourhoods of almost a thousand years old, comprised of alleyways and courtyard homes. The bar is like a hole in a wall in a maze, but once inside, we felt like we were back in the States. This place could easily pass for a Brooklyn dive bar.

You often get the best flavour for a design project, and a community, and the opportunities therein, by immersing yourself with the locals. The full day and night were spent discussing politics, pop culture, and the interesting intersection of American and Chinese craft beer. And while the next morning was a bit hairy, we got to see the beautiful, rural setting of the Great Wall — a welcome contrast to the fast-moving urban scenes we’d previously experienced.

We returned to Indiana, and after a few days to decompress, we sat down and formalised how the identity should look and feel. We prepared a new definition for the Prodigy audience, essence, positioning, and messaging. The answer? American Craft Beer. We travelled nearly 7,000 miles to realise that the Chinese consumer wants a Western-made beer brand, or, at least, a craft beer that has some semblance of America. It had to look somewhat familiar to what we’ve seen over the last 8+ years of working in this industry.

While the resulting identity looked vaguely American, it retained key elements to resonate with the Chinese audience. The main icon was inspired by ribbons (a reference to academia; red ribbons are often used in China as a good luck charm), and a combination of the letter ‘P’ and lucky numeral ‘8.’ The icon is set atop a bottle cap seal (combining academic and beer references). The palette has a warm, nostalgic feel that has been a staple of the American craft beer aesthetic for years. Finally, we rounded out the design with rule lines, grid lines, and hand-drawn elements to further reference academia and expertise. This spoke to the original brand essence and positioning of Prodigy as the intelligent craft beer choice for an enlightened, American craft beer academic who’s fallen in love with Chinese culture.

We went on to illustrate and design the labelling for Prodigy’s two flagship beers — Happy Hydra IPA and Beijing Haze (a Hefe).

Beijing Haze Hefeweizen (4.7%) is inspired by lazy summer days in the mountains or by a lake. Brewed to Reinheitsgebot standards, this refreshing wheat ale is lightly hopped with a fruity aroma and hints of banana and crisp apple. Happy Hydra IPA (6.9%) is brewed with cascade, centennial, and columbus hops to deliver a bold, balanced and hoppy beer.

Our first Chinese project could have gone a bit smoother, but we don’t think it could have gone any better. Flying to Beijing to experience the city and its welcoming people was an amazing opportunity that immediately guided us on how to tell the Prodigy Brewing story. 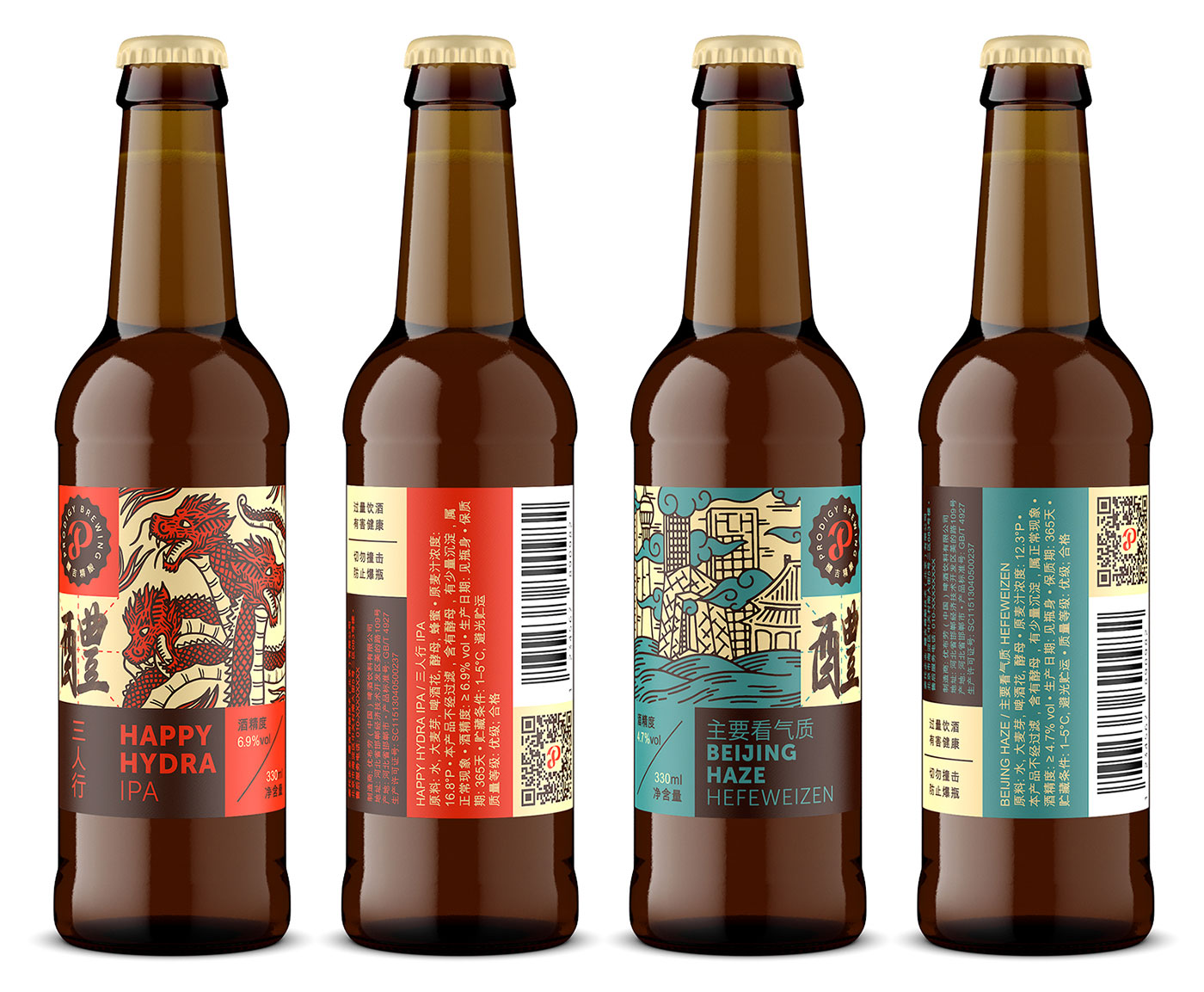 A dynamic hybrid of styles, cultures, and tastes. I wonder how the project would’ve been if the team didn’t go to China.